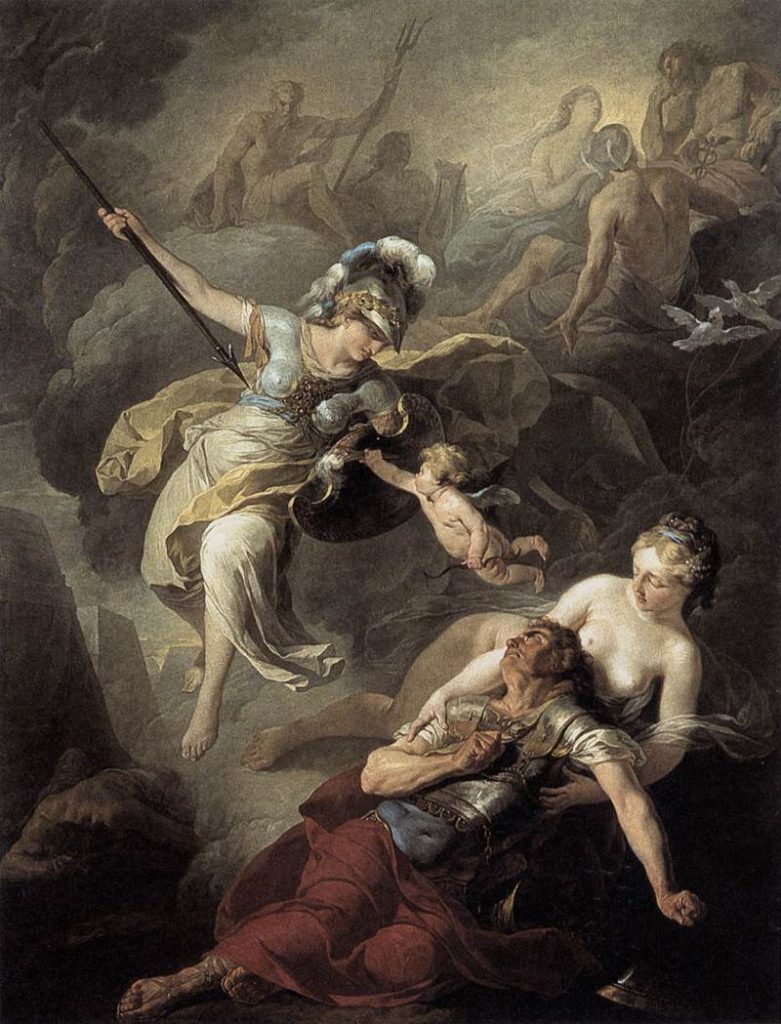 The fearless and mighty Ares (Αρης), the Greek god of war (Mars to the Romans). Sitting high atop Mount Olympus, presiding over battlefields and armies. However, sometimes watching wasn’t enough as he loved the taste of battle. Interfering in them is what he did best, much to the detest of not only his fellow Greek gods, but his parents as well. He most noticeably intervened if one had placed his lover, Aphrodite (Αφροδίτη), in harm’s way. For if they did, they’d soon see the glimmer of his sharpened spear blade peering over a shield adorned with a serpent.

Who Was Ares, The Greek God Of War?

Ares, being a Greek god, came from the most divine source. He was the son of Zeus (Ζεύςn) and Hera (Ἡρη), the king and queen of the gods. However, since his thirst for war was more than necessary, his parents were never fond of him and he was often at odds with them. This, of course, did not stop him from asking for help from his father in times of need.

Ares had two sisters:
Eileithyia (Εἰλείθυια), the Greek goddess of childbirth and midwifery.
Hebe (Ἥβη), the goddess of youth.

He also had a few step-brothers and sisters. Most famous in his myths is probably, Aphrodite, the goddess of love, beauty, pleasure and procreation, from Zeus’s other wife, Dione (Διωνη), a Titan Goddess.

The Greek God Of War’s Other Step-Siblings Were:

The Children Of Ares

Ares had many children according to Greek mythology. However, he had three main children with his lover, Aphrodite. They were:

Their names are quite fitting for the God of War, don’t you think?

The First Trial Of The Gods

It’s only fitting that Ares was the first of the Greek gods to stand trial for murder. Ares’ murder trial was the first trial the Gods had ever had, and the location of this mighty trial can still be seen today.

Halirrhothius (Ἁλιρρόθιος) was the son of Poseidon (Ποσειδῶν) and Euryte (Εὐρύτη). One day, Halirrhothius came upon Alcippe (Ἀλκίππη), one of Ares’ daughters with Aglaurus ( Ἄγλαυρος), and raped her (or attempted to as we have contradicting myths). This enraged the God of war, so he came down upon Halirrhothius with his spear and killed him. Poseidon demanded justice for his son, and accused Ares of being a murder.

With Poseidon’s accusation of murder, and Ares deeming it a worthy cause, a trial was held on top of a rock next to the Acropolis. This rock is known as Areopagus, or Ares Rock (Ἄρειος Πάγος). This location can be visited to this day. 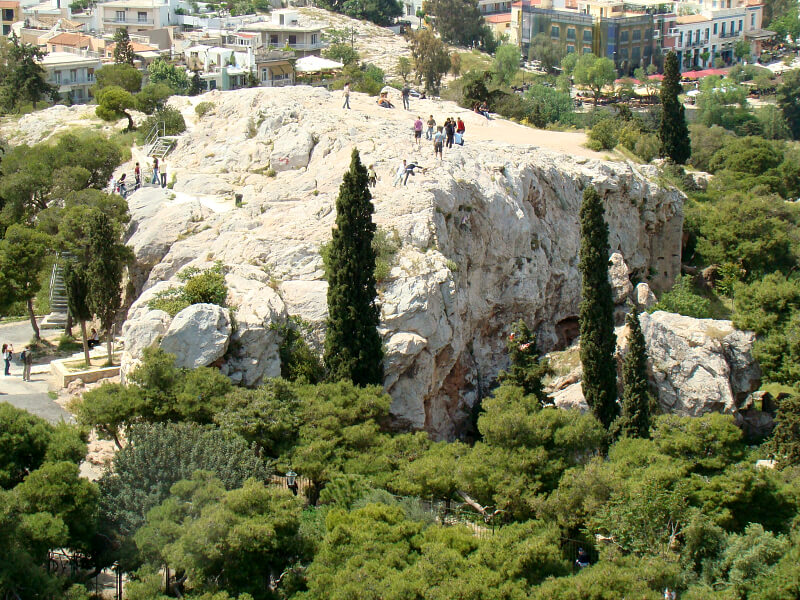 Fun fact, this location served as the location for the elder council and also the trials of deliberate homicide in ancient times. Another high profile case was that of Orestes ( Ὀρέστης), for matricide.

While on Areopagus, the trial ensued, and Ares demanded his reasons for killing Halirrhothius were justified – it was to protect his daughter against rape. While Poseidon disagreed and labeled him a monstrous murder, it was not enough to sway the court of the gods, and Ares was acquitted and set free.

Ares being the God of war loved being in battle. He always seemed to find a way to do more than just preside over the battlefield – for him, he wanted to be down in it, fighting. His most notable battle was that of the 9 year Trojan war.

During the Trojan war, Aphrodite took the side of the Trojans because in a way she had caused it by promising Paris, the Trojan prince, that he could have her half-sister, Helen of Troy. Yes, the face commonly known as, “the face that launched a thousand ships,” was the half-sister of the goddess of beauty. Naturally, since Ares’ lover was on the side of the Trojans, he rushed to Aphrodite’s side ‘as swift as a thunderbolt from the mighty hand of Zeus’ and as a result fought against the Greeks. They were joined by Artemis and Apollo. Hera, Athena, and Poseidon were the gods on the side of the Greeks – and the mighty Hector slayer – Achilles of course.

The god of war terrorized the battlefield, standing beside Hector who annihilated the Greeks, since Achilles had not be there to fight.

Ares roamed the battlefield with his children, Phobos (fear) and Deimos (terror). In addition, he was joined by Enyo (Ἐνυώ), the mighty goddess known as the Sister of War. She was responsible for the destructions of cities and inciting terror and bloodshed alongside Ares during the Trojan siege.

Could you imagine fighting against that? The God of War, The Sister of War, with fear and terror at their sides? All this to side with and protect his lover, Aphrodite. 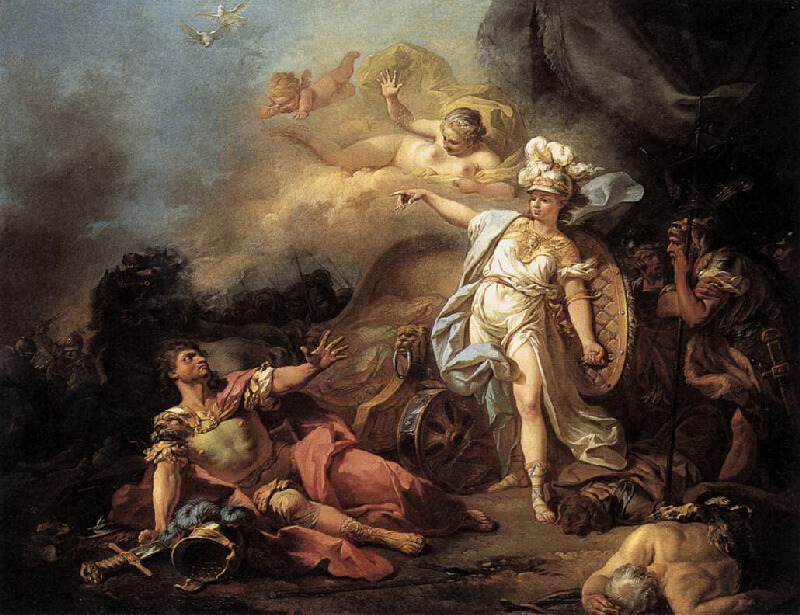 We are to believe that throughout their time, Ares and Athena continuously were in conflict. It comes to the forefront during the Trojan war. Since Ares is causing too much bloodshed, the Gods want to stop him. Athena comes down with the blessing of her mother, Hera, the queen of the gods, and also Ares’ mother.

This is the dialogue that they had right before Ares is wounded:
“[Athena speaks :] Violent Ares, that thing of fury, evil-wrought, that double-faced liar who even now protested to Hera and me, promising that he would fight against the Trojans and stand by the Argives. Now, all promises forgotten, he stands by the Trojans.”

With that, Diomedes (Διομήδης), an Achaeans warrior second only to Achilles in terms of his reputation as a strong fighter, throws a spear guided by Athena and strikes Ares. Ares lets out a mighty scream and flees back to Mount Olympus to protest to his father for allowing him to become injured by Athena and for allowing Hera and Athena to intervene.

“[Athena wounds Ares and accuses him :] You are paying atonement to your mother’s [Hera’s] furies since she is angry and wishes you ill, because you abandoned the Akhaians, and have given your aid to the insolent Trojans.” Credit

Aphrodite, The Lover Of Ares 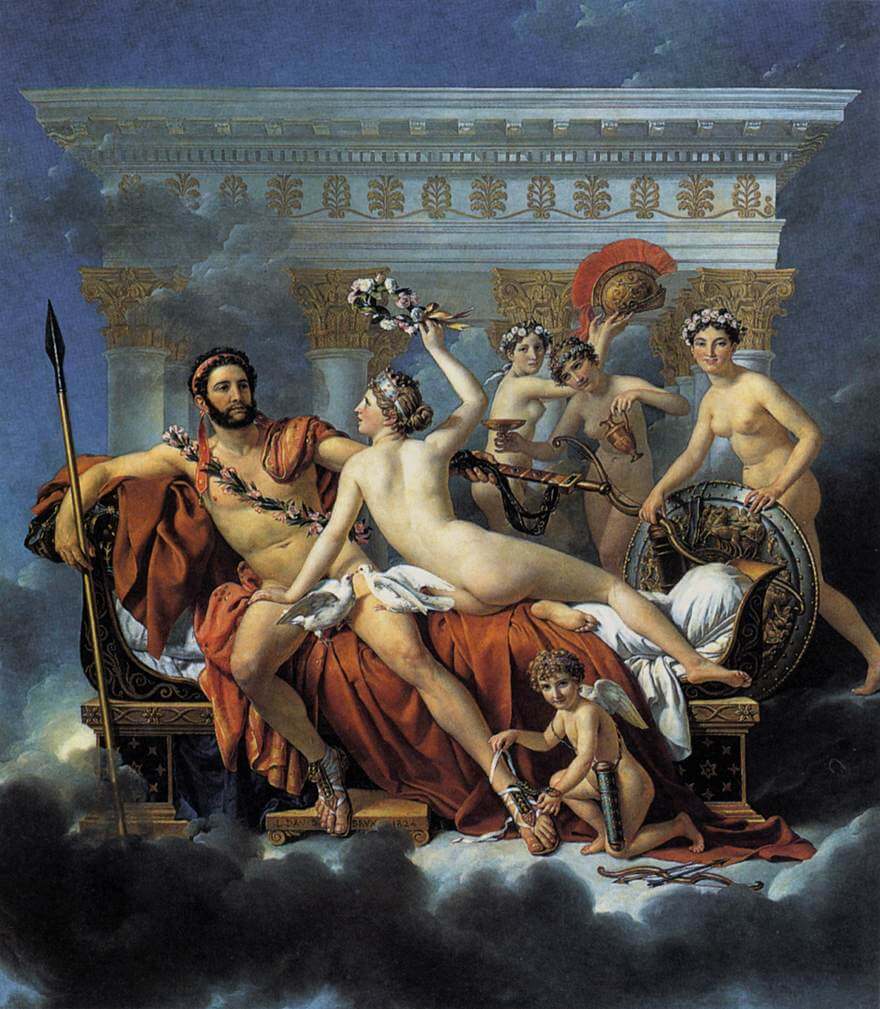 As you may have gathered, the goddess of beauty, Aphrodite, was the secret lover of Ares. I say secret because Aphrodite was actually married to someone. Her husband was Hephaistos (Ἡφαιστος), the god of fire, smiths, and craftsmen.

Their love triangle is one of my favorites, as it’s the reason the rooster (Alectryon ἀλεκτρυών) crows at sunrise.

Ares Is The Reason A Rooster Crows At Sunrise

One day, Ares and Aphrodite hatched a plan to secretly meet. The lovers did not want to be disturbed or seen, and thus Ares charged a young boy by the name of Alectryon to stand guard of their bedroom door.

After a few hours the boy became tired and fell asleep. During this time the Sun God, Helios (Ἠέλιος), saw the boy sleeping at the door and decided to enter the room to see what the boy was guarding. There, he saw Ares and Aphrodite making love. Knowing Aphrodite was married to Hephaistos, he ran out and immediately told all of the other gods of their affair.

Ares grew so mad that they had been discovered that he turned Alectryon into a rooster as punishment for not alerting them that Hilos, the Sun God, was entering the room. That is why in ancient Greek, Alectryon is the word for rooster, To this day, the rooster crows when the sun rises, to alert Ares in the chance him and Aphrodite are together.

How Was Ares Viewed By The Ancient Greeks?

Unlike most of the other Greek gods, there wasn’t too many statues or buildings erected to Ares. Moreover, the ones that were didn’t highlight any specific god qualities, so it’s hard to determine them from an average warrior; his statues tend to be plain and not have too much detail beyond a man with a spear. He was however honored more often when Greek city-states were at war.

The most well known people to honor him where the Spartans. He was viewed as a warrior all spartans should aim to be. He was physical, good in combat, and had supreme military and battlefield knowledge. The spartans also offered sacrifices to him in the hopes of him offering protecting and helping them fight in battle.

The statue of Ares in Sparta was also draped in chains, a representation that Ares’ power, great war abilities, and fear were not to leave Sparta and should stay bound to the city.

Overall, the great God of War, Ares, was an interesting character. While he is popular today for being a fierce fighter and portrayed as the epitome of fitness, strength, and military foresight, at the time, he was looked at as a normal handsome young man without any distinct attributes to separate him from other combat heroes (Achilles).

His love and adulterous relationship with Aphrodite often lead him to pain, and to fighting against the Greeks in the Trojan war. Hopefully, you’ve learned something valuable about Ares the God of War. Myths are a very interesting field. There are so many, some contradict one another, so if you’ve learned something a bit different than what was said here, that may be why.

To continue your learning of Ares, check out the following, which were used heavily to produce this article.