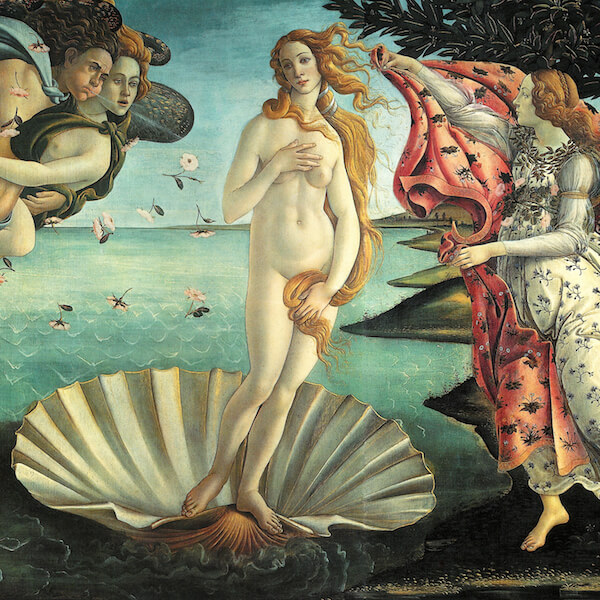 Contents for Aphrodite | Greek Goddess Of Love and Beauty

Aphrodite (Αφροδιτη) the Greek goddess of love, beauty, pleasure, and procreation. She was known to the Romans as Venus. Her beauty was unrivaled by her fellow Greek gods, as she was even named the most beautiful of all the gods – granted with a little bribe (we’ll discuss that soon). Aphrodite also possessed an enchanted girdle which gave her the power to have people fall in love with and desire her; Hera was said to have borrowed this to make Zeus fall in love with her.

Aphrodite was married to Hephaistos (Ἡφαιστος), the god of fire, smiths, and craftsmen. However, as we’ll soon learn, this wasn’t by her own choosing, and thus she had a longstanding affair with her true love, Ares (Αρης), The Greek god of War.

How exactly did Aphrodite come into the world of the gods? Well there seems to be two main theories. One we know much more about. Let’s explore each.

According to the ancient Greek Poet, Hesiod (Ἡσίοδος), who wrote between 750 and 650 BC, Aphrodite was born from the sea-foam created by the genitals of Ouranos (Οὐρανός). Wait…what? Yes, let’s explore that story a bit. PS. It’s this birth that’s depicted in the painting at the top of this post.

One night, Ouranos, the personification of the Sky, came down to see his lover, Gaia (Γαῖα), the personification of Earth. While laying naked with her, Ouranos’ son, Kronos (Κρονος), King of the Titanes and the god of time, ambushed him with a jagged sickle. In one foul swoop, Kronos cut his Father’s genitals off and threw them into the ocean. When they crashed into the ocean, a huge white foam was created in the vary spot and spread outside. There in the center, standing naked atop a scalloped shell, stood an immortal woman. She was given the name Aphrodite, deriving from Aphro-geneia (the foam born) and Anadyomene, which translates to, “she who rises.”

She would eventually ride those scalloped shells to shore along side Eros (Ερως), the god of love (commonly known by the latin equivalent – Cupid), and Himeros (Ἱμερος), the god of desire. There are some references (specifically by the Romans such as Ovid and Seneca) that say she was pregnant with both Eros and Himeros and that she birthed them right after she herself was born.

In Homer’s the Iliad, written during the 8th century BC, we learn of Aphrodite’s alternate birth story. However, it’s in passing as the story in the Iliad is played out. For example, during Homer’s epic, he talks of Aphrodite being wounded by the fierce warrior, Diomedes (whose only bettered by Achilles) on the battlefield of Troy. Once she’s wounded, she flees to her mother Dione. Later on, when we learn of Hephaistos’ threat to tell Aphrodite’s father, Zeus, of her adultery with Ares. While there is little here to gather how her birth came to be, by some, Zeus and Dione are her mother and father.

While we’ve learned of her birth. Let’s take a look at the Goddess of love’s family tree.

This is a tricky one. If we take into account her sea-foam birth, then her relation to any of the other Greek gods doesn’t seem to fit. If however, he father was in fact Zeus, then she’s related to some of her fellow Greek gods. If that’s the case, her siblings would be.

She’s also listed with having many others, even Helen of Troy as a half-sister, however there is lots of conflicting information. Above are her main siblings from the gods perspective.

Most of her children were with Ares, so we’ll start there.

Children With Other Gods

There are many myths that both affirm and contradict some of these children. Furthermore, she’s also credited with more, but these listed above are the main ones. A great resource for further exploring this is Theoi – Aphrodite’s family. 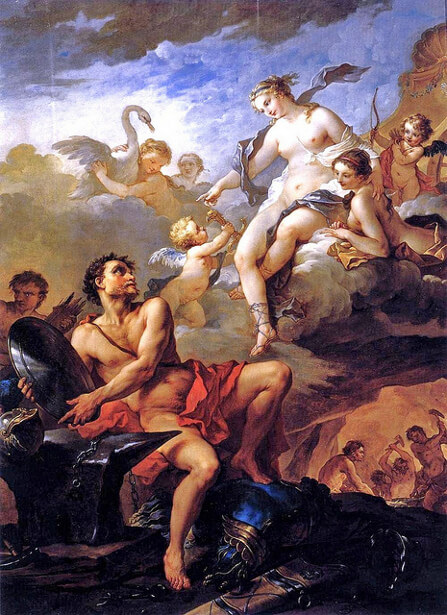 Yes, it’s true that the Greek goddess of love, beauty, pleasure, and procreation was in fact married. However, during her life, she loved Ares and spent most of her time with him and birthing his children. Why then was she in fact married to someone else? Well, Zeus offered her as a prize.

Hephaestus, in ancient Greek, Hephaistos (Ἡφαιστος), was the god of fire, smiths, and craftsmen, grew up on earth, but was actually the son of Hera, the queen of the gods. However, upon his birth, Hera noticed he was crippled. Ashamed, she threw him from the top of Mt. Olympus down to Greece.  There, the goddess of water and mother to Achilles, Thetis (Θέτις), raised him. He grew up and became an expert blacksmith with the ability to craft anything. (fun fact: Hephaistos is the one who made Achilles’ impenetrable armor.)

Hephaistos grew up with a hatred for his mother for disowning him. Once he mastered his craft, he devised a plan for revenge. He began sending gifts to the gods in homage, and to his mother, Hera, he sent a beautiful golden throne. When Hera sat upon it, the curse unlocked and she was cased and bound to the chair – unable to move.

With his wife stuck to the chair, Zeus became enraged. He called upon the gods to help free Hera. In return, he would offer Aphrodite (Αφροδιτη) the Greek goddess of love, beauty, pleasure, and procreation as a reward. Those who succeeded in bringing Hephaistos to Mount Olympus would be able to marry her.

Aphrodite felt that her true love, Ares (the god of war), couldn’t lose. Fighting is what he did. Thus, she accepted and agreed to the arrangement, with the firm belief that Ares would return victorious and they could finally marry.

Ares readied his spear, grabbed his shield and descended to face Hephaistos. The god of war intended to be victorious and win Aphrodite’s hand in marriage. Ares stormed the place where Hephaistos was hiding and begin his assault with all he had. While Ares was battering the forge where Hephaistos was hiding, the skies turned red. From overhead, flaming metal rained down upon Ares. He was thus forced to retreat and return to Mount Olympus defeated. The god of war had lost.

Dionysos (Διονυσος), the god of wine, was the next to attempt to bring Hephaistos back. However, with the benefit of going second and seeing the flaming metal descend upon Ares, he knew force wouldn’t work. Thus, he peacefully approached Hephaistos and convinced him that if he would freely and voluntarily return to Mount Olympus with him and free his mother, he would be rewarded with the hand of the Aphrodite. This excited Hephaistos, as he’d marry the goddess of beauty; so he returned, freed Hera and married Aphrodite. However, the goddess of love was is much disarray and did not wish to marry him, but was forced. It  was a sad day for her and Ares. 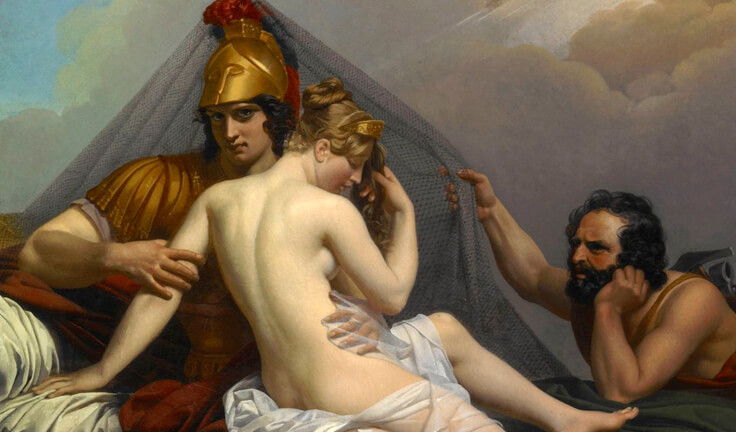 In Greek mythology, Ares is her main love interest. She is with him in many stories, paintings, and visual representations. One of the most well known is the reason the rooster crows at the sun. She had a minimum of 5 children with him, more or less depending on the time of the myths written and if it comes from Greek or latin. Overall, this was her main love, and one she would have married if given the choice. They even fight side by side in the Trojan war.

Who Were Aphrodite’s Other Lovers?

She was also linked to a few other lovers throughout the Greek myths, but these are the main ones.

During the trojan war, Aphrodite took the side of the Trojans because in a way she had caused it by a promise to win a contest.

Aphrodite, Hera, and Athena all wanted the prized apple. Thus, a contest was created to see who would receive the apple. Zeus charged Hermes to lead the three goddesses to the prince of Troy, Paris – he would pick which goddess was the most beautiful.

At Tory, the three goddesses appeared and offered him gifts, favors, basically anything to win. However, it was Aphrodite who promised Paris the hand of the most beautiful mortal woman in the world – Helene (Ἑλένη) of Sparta. Thus, Aphrodite won the apple and was knowns as the fairest goddess.

When Paris visited Sparta, he called upon Aphrodite to fulfill her promise. Aphrodite appeared to Helena and used her persuasion to leave her husband, Menelaus (Μενέλαος), the King of Sparta.

Helene then fell in love with Paris, and they fled back to Troy. Once there, she became Helene of Troy. Menelaus of course was furious and went to war with Troy. Thus, Helene became “the face that launched 1,000 ships.”

How Was Aphrodite Viewed By The Ancient Greeks

“[There is a] sanctuary of Ares [in Athens], where are placed two images of Aphrodite, one of Ares made by Alkamenes, and one of Athena.”

To view all the cults dedicated to her, and see how favorably she was in the minds of many different areas of the world, check out: Aphrodite Cults.

Overall, Aphrodite (Αφροδιτη), the Greek goddess of love, beauty, pleasure, and procreation was an interesting goddess. She embodied all that the ancient Greeks thought of with regards to beauty and love. It is interesting then that she has to struggle with love her whole life, not being married to someone she truly loves and having to sneak around with Ares.

I suppose that’s something the ancients wanted to teach us, that even the goddess of love doesn’t have it all – she still struggles to encapsulate her very essence by having an unhappy marriage, affairs, and discord.

If this has piqued your interest, here are some other readings to get you started on your path to learning more about the Greek goddess of love.

We couldn’t have written this without the wonderful website, Theoi. Additionally, good old Wikipedia and a bit from the Dictionary of Greek and Roman Biography and Mythology.