Alright ladies and gentlemen, the 2014 FIFA world cup is upon us! I for one am very excited. I actually watch the premier league religiously during the season (go MAN UTD), sometimes getting up at 5am on the weekends to watch the games. Soccer (football to the rest of the world) is my favorite sport so when the world cup rolls around it’s a happy month for me.

I do want to point out, that over the years Jane’s developed a love for the game as well, and can more or less name every player on MAN UTD. She watches a fair amount of games with me. When we lived in England during graduate school, she cheered on right alongside me in the local pub each weekend. Good times.

However, this post will not be about MAN UTD or England, but Greece. Yes, Greece is in the world cup this year, and I thought doing a post about the team which plays for the country in which this blog is dedicated to (cuisine wise) would be a fun one to write.

And Greece isn’t a team to completely write off, they have arguably one of the best defenses in the game and are ranked 12th out of 208 teams by FIFA (as of June 5th 2014).

Greece has always been a contender on the national stage. They made it to the quarter finals of UEFA Euro 2012 (a tournament they won in 2004 beating Portugal)

*For those of you that are not familiar with the UEFA Euro Cup, think of it like the world cup but with just teams from Europe. Thus, to win this tournament means you’re the best team in all of Europe.*

There is just too much that can be written about this team. Below I’ve highlighted the main aspects of the club. If you’d like to learn more, check out the links t the bottom of this post.

The manager (coach) of Greece’s national team is Fernando Santos, born in Lisbon, and has been the manager since his appointment in July of 2010. Prior to that, he was managing teams in Greece. In February of the year he became Greece’s manager, he was named by the Greek Football League as the best coach of the decade.

For the 2014 World Cup, Greece’s jerseys will be these below. White for home, blue for away. 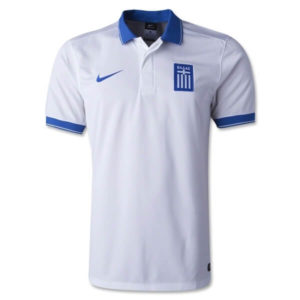 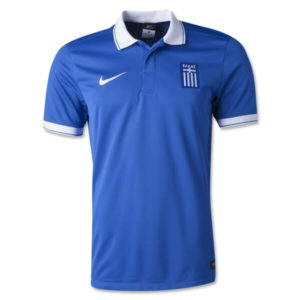 * If you’re interested in purchasing these, you can visit the Official FIFA Online Store.

Here is the team that manager Santos has assembled to play in the 2014 FIFA world cup.

Greece is in group C of the world cup. This includes: COLOMBIA, CÔTE D’IVOIRE, and JAPAN.

They set games they have are listed below. Greece will play more should they win and advance.

All times are Pacific Standard Time*

Notes- All the links listed above were instrumental in writing this post, especially good old Wikipedia. The images for the jerseys were taken from the FIFA link which is listed under the images.