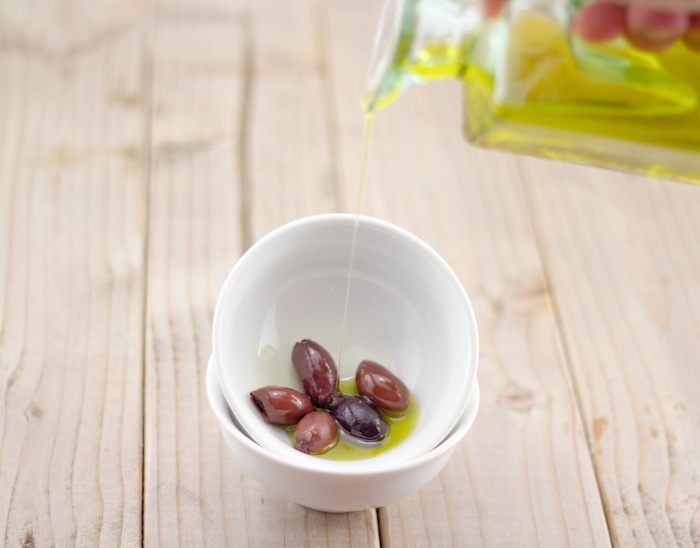 Did you know that in the Greek islands they have found fossilized olive leaves dating back 50-60,000 years old! The Greeks have been harvesting olives for quite some time.

It is said that Greece devotes around 60% of its cultivated land to exclusively growing olives.

Olive oil is a huge part of Greek cooking and culture. It is used to dress pans before cooking and poured over Greek salads and cheeses to eat. As a matter of fact, most Greeks get a majority of their daily fat from this healthy source.

It’s noted nice greenish color makes it look amazing against any dish and it’s subtle smooth taste is perfect for even the most complex meals.

In my opinion, the best olive oil in the world comes from Crete. I had it for the first time while there and would never want to use anything else again. The second best comes from the well-known Kalamata olive.

What Olive Oil Does Greece Produce?

Since 80% of production is based on one type of olive oil, that is what we will discuss.

This is the one to use, buy, and love! Extra virgin olive oil is what is served most in Greece and anywhere in the world. It is of top quality, aroma and taste. This type of olive oil can have an acidity percentage up to 0.8% per 100g. Anything beyond this, and it cannot be called extra virgin.

With acidity levels, it is normally the lower the better. Some of the best extra olive oil I have had came from Crete, Crete Olive Oil, and it was .02%. It is an olive oil you do not cook with, but eat raw (on salads, cheeses, etc.,).

EVOO is basically olives pressed and put in a bottle. No solvents or chemicals can be added. It’s olive oil in its purest form.

Regions of Greece Where Olive Oil Comes From:

Crete is a wonderful island. The home of Hercules and ultimate relaxation. What makes olives from Crete so amazing is the islands geographical location and layout. The weather is always perfect and the mix of rich soil and Aegean Sea give birth to a wonderful small greenish looking olive. The history of the olive in Crete is inspiring as well. The fruit has been growing in Crete for over 3,500 years. 90% of the olive oil that is shipped from Crete is .extra virgin. So rest assure if you’re having Cretan olive oil, its EVOO

In addition, there have been many studies done on Cretan olive oil and the Cretan diet. The people of Crete have one of the longest life spans and one of the lowest risks of heart disease than any other place in the world.

This olive oil is derived from the city in which it gets its name: Kalamata (it’s also where my family is from!). The city itself is beautiful, and I really do think it’s one of Greece’s, “hidden gems.”

Kalamata olives are world-known, one may argue they are the best-known olives in the world. Kalamata is a port town, and located on the southern coast of the Peloponnese, about 150 (239km) southwest of Athens.

Kalamata olives distinctive, almond shape, low acidity, and dark almost reddish brown color make up its character. While you may find them pitted, traditionally, they are found with a hard seed within—so be careful!

Like with Crete, the geographical location plays an important part of why Kalamata olives are so wonderful. The temperature and soil is top notch and perfect all year around.

Other Ways Greeks Use Olive Oil

Besides using it to coat pans, dip bread into, and dressing over salads, here are some other ways in which the Greeks use olive oil:

I highly encourage you to give Greek Olive Oil a try (both cooking with and eating). I do not think you will be disappointed!

*A tip for cookers out there: you should have two bottles of olive oil in your kitchen. One to cook with and a nicer one you drizzle over salads, fruit, and cheeses.