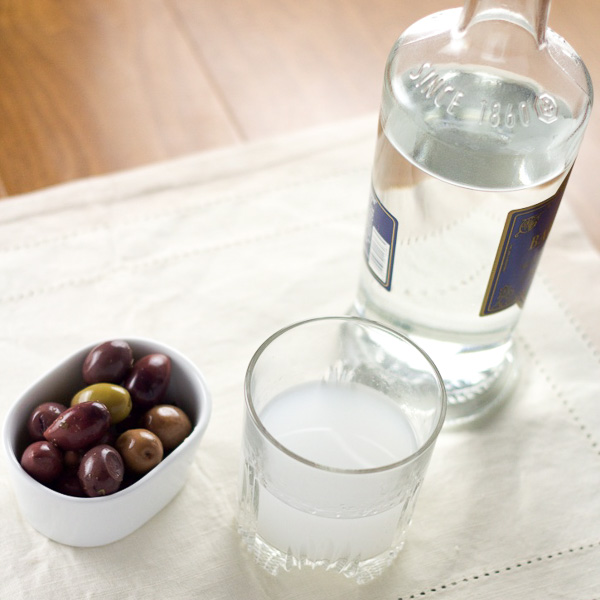 If there is one symbol of Greece and its culture, it would be ouzo. Drinking ouzo is a lifestyle.

Shortly after the war of Greek independence, mass production of this special drink took shape. This anise (think black liquorice) flavored drink is served as an aperitif in Greece. This lovely drink captivates the Greek spirit (kefi) more than anything else. In 2006 the Greek government gained exclusive rights to the name, and thus, if it’s not made in Greece, it can’t be called ouzo. If you head to Greece, you’ll see “ouzeries” where this stuff flows like water. It is served with Greek appetizers (mezedes), such as: octopus, bread, baked fish, feta and olive oil, olives, etc.,

Ouzo is distilled from grapes and the best ouzo is known to come from the Greek island, Lesvos. It is made at about 45% alcohol, so it’s very strong. Therefore, there are great benefits to drinking it traditionally – with food.

On the subject of food, Greeks may also include ouzo in the kitchen, using it to create some signature Greek dishes and give food and or desserts that anise taste.

One of the great things about Greek ouzo is its transformation when iced water is added. When first poured into a glass, ouzo it is clear. However, when water is added, it becomes cloudy (the oils produced from anise are not soluble in water) and it looks like the picture here.

I first tried ouzo many years ago during Christmas. We had family over and someone pulled out a few bottles and began to pour some out for everyone. I was memorized by the cloudy effect once water was added so naturally I had to try it.

Since I did not like the taste of black liquorice at the time, the taste did not appeal to me at first, but something else did. I noticed I was partaking in my Greek roots. I sat with my family for hours talking, eating, and enjoying life. Over time, the taste grew into a delicious flavor and today I drink it often. It makes me feel at home. It reminds me of the good times I’ve shared with my family. I agree that not everyone will like this special drink, but I think everyone deserves the chance to try it and be caught in the Greek way of life and envision themselves surrounded by family and friends (maybe on the beaches of Santorini).

I want to point something out about Greek ouzo – a warning if you will. I don’t know if it’s the sugar in the grapes or how it is distilled, but the effects of the drink are time delayed. Ouzo is sneaky and before you know it, you’ll feel pretty loose. Drink with caution. Drink to enjoy life. Drink to embrace Greek culture, Greek food, and to enjoy the company of family and friends. If you do not pace yourself, you’ll wind up the life of any part. This is from personal experience. ☺

Remember, Greeks will pine over one glass of ouzo for hours as they sit, relax, talk, and eat. It is neither a rush nor a quest to feel light head.

As a tip, only mix ouzo with iced water. Anything else and you’ll get stares and maybe a laugh, but I guess after a few drinks, you’ll be the one laughing.