Stuffed cucumbers with feta and Greek yogurt – because Greeks like stuffing vegetables (tomatoes, cabbage, bell peppers to name a few)

Cucumbers are a staple in our home. We have them quite a bit, partly because they pair nicely with so many other foods, and also because they’re just so juicy and delicious. We have them in salads, as a snack, with lemon, and now, with feta and Greek yogurt! It reminds us of the popular celery and peanut butter snack.

Last weekend was pretty hot. I mean summer is winding down, sure, but it isn’t going anywhere without a fight. When it’s hot, we look for things to keep us cool. Yes, we’ve got our massive amounts of La Croix water on tap (if you’ve never had one, you’re missing out!), but there’s also food to help, too.

Our go-to’s tend to be watermelon (like our watermelon and feta salad) and cucumbers. We store both of these items in the the fridge before eating so they come out nice and cold. There’s nothing like getting a burst of refreshing juices as you eat snacks on a hot summer day.

After a mid-morning run the other day, Jane and I came home looking for a healthy snack to eat that would cool us down and tie us over for a bit before lunch. Snacks always seem to be a struggling point for people, us included. There’s just too many unhealthy things to grab that are quick and convenient. We try not to buy any of those things, so it kind of forces us to be healthy. That’s not to say we don’t have our cheat days – everyone has to have those 🙂 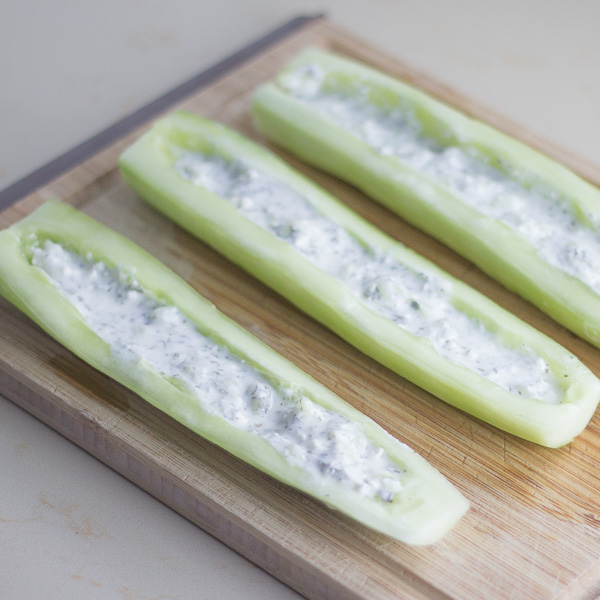 We saw two things in our fridge that stuck out to us – cucumbers and Greek yogurt. The latter is perfect since it’s packed with protein and you need that stuff after a workout.

Cucumber and Greek yogurt are no stranger to one another. I mean, they live in perfect harmony in tzatziki (where we took our inspiration), so we knew there was something we could make.

At first we thought to make tzatziki, but then went against it, for the simple fact we didn’t have all of the ingredients. However, we had most, and that lead us on to making this lovely dish.

We prepared the cucumbers and mixed together the Greek yogurt and other ingredients. We needed a salty kick, and we eat feta with cucumbers often, so boom – feta to the rescue because when is that ever a bad thing to add?

The Stuffed Cucumbers With Feta and Greek Yogurt were delicious. The thick Greek yogurt kept everything together so as to not fall off or get a bit messy, something we thought about after they were made.

The cucumber with yogurt and feta ended up being an extremely light and refreshing snack. It’s super healthy and actually pretty filling. Best of all, it’s very reminiscent of tzatziki, which we could probably live off of at this point because we love it so much.

If you’re looking for something quick and easy Stuffed Cucumbers With Feta and Greek Yogurt is it. Talk about an easy appetizer (meze)/finger food that everyone can enjoy.

Feel free to add more Greek yogurt to make more/thicker filling. You can also cut them into thirds and serve.