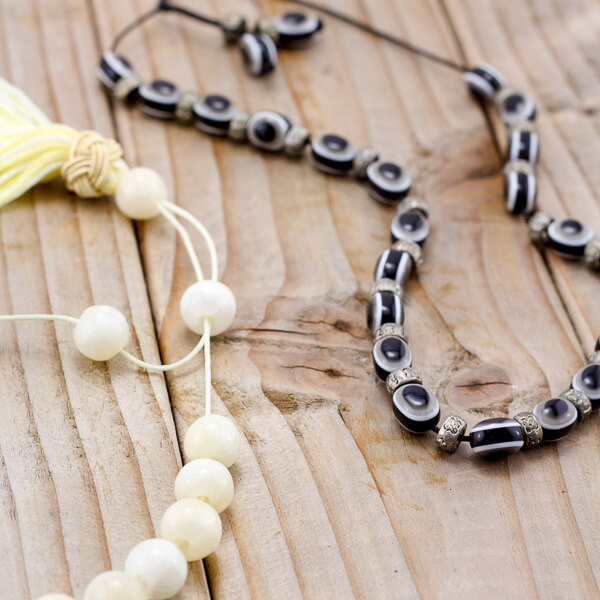 Greece is an enthralling country with a wide variety of traditions and meaningful objects. Throughout their history, they have built up a rich and storied culture that has seeped through every facet of their nation. One of the many great aspects of this culture is the usage of Greek worry beads, also known as Komboloi. Here, you will find everything there is to know about the history and cultural significance of Greek worry beads.

In essence, worry beads are a string of 23 beads, though they can honestly be any number, that the user sifts through the palms of their hands, tipping each bead over as their fingers reach them, until, at last, they reach the very end of the string and proceed once again. Greek worry beads once had very strict guidelines that followed their usage, as they have existed since the beginning of Greece itself. It is believed that Komboloi first originated with monks hundreds of years before the time of A.D. Those monks would often use any inexpensive material at their disposal, such as bits of wood, shells and olive pits.

Despite the fact that they were typically used as a means of prayer, similar to what modern prayer beads are used for, Komboloi transitioned into an object that had no religious meaning whatsoever. This transition seemed to have fully taken place after the end of the Turkish occupation of Greece in the 1800’s, when the citizens of Greece decided that there would be 23 beads used instead of the typical 33, as the 33 number had a religious aspect tied to it, related directly to the number of years that Jesus was alive. The word Komboloi is derived from the words Kombos and Leo, which means “in each knot, I say a prayer.”

Use of Greek Worry Beads

There are two methods in which worry beads can be used, which are often known as the quiet method and the loud method. The quiet method is as described in the first paragraph. The loud method is somewhat different in that it’s typically used outdoors. With this method, the beads are separated into two distinct groups on each end of the string. The user then holds the string in the very middle, the empty space between the beads. Upon doing this, they swing the back line of beads up and over their finger to where it clangs against the other line of beads. Once this is done, the user places their fingers in the space it had been previously and repeats the process. 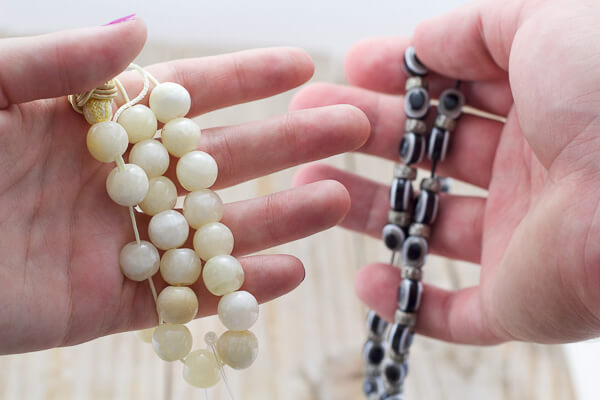 In modern Greek society, the use of Greek worry beads is a practice that can be used for any number of things. It is oftentimes used as a means to guard against bad luck, as well as something to do that allows for relaxation and enjoyment. It’s also said to be a very effective tool for helping to cease a smoking habit and reduce stress. Today, the string used to hold the beads is often made of silk, while the beads can be crafted by anything from plastic to marble, with amber and silver being signs of prestige and sophistication. Although these beads were typically used solely by men in the past, they have since transitioned into an object that is utilized by both men and women. This change has allowed worry beads to become more popular and entrenched within Greek culture than ever before.

There are a great variety of meanings that can be associated with Greek worry beads, especially as it pertains to music. Though it may not seem like it at first glance, Greek worry beads are a form of musical interpretation, the rhythms and beats of the beads hitting against each other tend to cause a feeling of relaxation. As was mentioned previously, the origin of Greek worry beads had a religious undertone, but, these days, it is stressed that they are now completely unorthodox objects.

Though on a much smaller basis, Greek worry beads, due to an age-old superstition, can also be thought of as a ritual token to be used on a person’s wedding night. It is believed that a “worry bead ritual”, one that involves a fast-paced backwards and forwards movement of the beads, is the key to a successful and fulfilling wedding night and honeymoon period.

Greek worry beads hold a large cultural significance in the country of Greece. Although many traditional aspects of their culture are based on religious connotations, worry beads have always been separate from that, used as a means to express joy or happiness. Throughout Greek history, worry beads have fluctuated in popularity, sometimes meaning one thing and other times, another. The thousands of years that they have been around has allowed them to grow to the point that they are now used by the vast majority of citizens.

Worry beads are used by the citizens of Greece as an object to display their pride as a Greek native. They are oftentimes given as gifts between friends or family members. In fact, one of the first gift’s I ever gave Jane were worry beads brought back from a then recent trip to Greece. We both have them handing in our cars (over the blinker handle) for good luck – something I’ve personally done since I started driving.

Overall, I hope this shed some light on Greek worry beads, and you can see that they are simply a cultural object that has become a part of who us Greeks are.