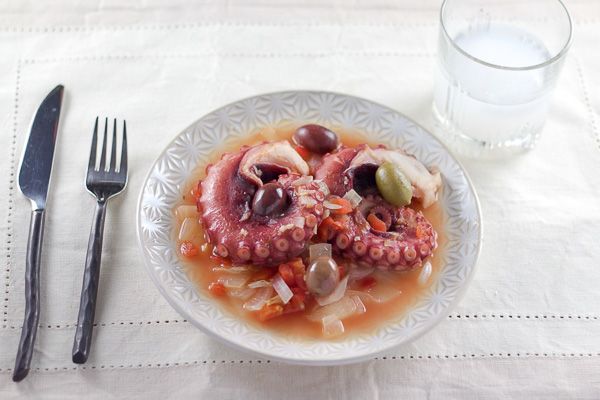 This past weekend Jane and I did absolutely nothing. It was fantastic. You see, for the past 6 months, every weekend had been filled with wedding planning, decoration design and making, and discussions. You know, those talks of who is coming, where are they sitting, how should the this or that be set up.

But since it was our first weekend post wedding – we didn’t do anything. We had plans to open a bottle of wine and make a nice dinner. We stopped after the wine.

It just felt so nice to relax and take a step back and enjoy our first full weekend as husband and wife. It’s weird, especially since it’s only been a week, but our mentalities have changed. It’s like we view things differently now. I can’t explain it just yet, but it’s something we both feel and is something that’s very good.

Now that we’re back in the swing of things, we still wish we were off on our little vacation. We’ve decided to push our honeymoon back until after summer, as it’s a bit cheaper so we’re having preliminary talks about where to go and what to do.

One things we’ve both learned is that getting married is all about growth, and speaking of growth, this is exactly what we experienced when cooking this recipe.

This octopus recipe was a huge feat for us, simply because we’ve never cooked octopus before! It was a culinary level up for us for sure.

We’d been wanting to cook octopus for awhile, as it’s a staple in Greece and during the summer you’ll see them hung everywhere to dry out.

But we were a little intimidated by them. Then one day that all changed.

We were at our local store browsing the fish section when I saw it. For the first time, the store was carrying octopus. I looked at Jane. We both knew what we had to do.

I called the fishmonger (I don’t use that word aloud, I just like writing it ha) over and informed him we’d be taking the octopus.

At first, I expected him to give us a weird look, and say, really? But of course he didn’t and grabbed the octopus from the case, wrapped it up, handed it us, and moved on to other people.

I felt a sense of pride when I placed the octopus in our cart. For an American, buying anything that doesn’t look pretty, have it’s head removed, and cleaned isn’t something we tend to do. It is what it is I suppose. However, the rest of the world buys fish whole and octopus, so why not us?

Later that day, it was time. It was time for us to face the octopus. One on one. To be honest, we weren’t sure what we were going to do.

I quickly did a youtube search and found this video from the well known Greek chef, Diane Kochilas. In it, she prepared octopus and fava (in Greece, fava are yellow split peas).

I used that as a guide.

I unwrapped the octopus and the smell of the sea overtook me. Being that the octopus is majority water, it encapsulates the ocean. As Chef Kochilas said, “An octopus exudes the sea.” 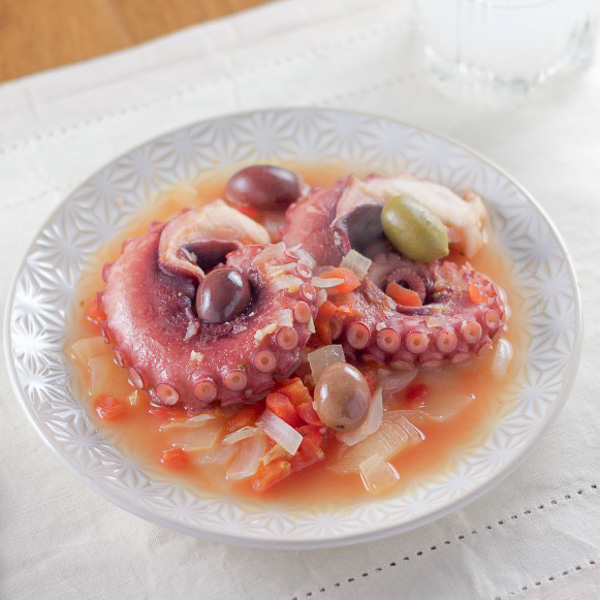 In all honesty, it reminded us of the Aegean. Of being back in Greece since that’s the last time we’d had it.

I took the octopus in my hands and it felt slippery. The tentacles were soft and the suckers (suction cups? I’m sure there’s a word for them) were a bit harder than the rest of the body. They felt dry which was weird, but makes sense, since the rest of the body was wet.

After I had it in my hands, it didn’t seem that intimidating anymore. Especially since you’ll see it’s very easy to prep and get it ready to be cooked.

Following the steps in the video, I removed the sack, the beak (which I would have never known about), and cut the tentacles accordingly.

That was it. We were now ready to proceed with the recipe.

Jane and I in our first attempt at cooking octopus wanted to make it in a traditional way. A way that spoke to Greece and it’s culture, so we used ouzo  🙂

We borrowed a bit from Chef Kochilas and added our own to make it different. Partly relying on past experiences on what we thought would work and how we’ve had it in the past.

It was amazing to see the octopus produce so much water and reduce so much in size. Adding the octopus to the pot with nothing was different, but sure enough it created the necessary water for the recipe.

Adding all the ingredients created this delightful concoction of smells. From the ocean to ouzo, with a touch of tomatoes and garlic, it really morphed into a dish we became proud of.

When we plated it for shooting, we had a sense of pride. This grayish, slippery, somewhat intimidating creature, had been transformed into a proper meal – all by us!

Overall, we both agreed that it was no where near as bad as we thought it would be and that it was a fantastic learning experience. We now plan on buying fish with…wait for it…the head still attached (i.e. whole fish). I know some of you think, umm, I buy that every day, but here in the states it’s not so common so it’s a big deal for us.

Well, what are you waiting for? Get out and buy a octopus and make this delicious Greek octopus recipe now! If you’ve never cooked with one before, it’s not so bad. Trust us.

*Water is only needed if too much evaporates while cooking.
** During this cooking time is where you'll add the extra water if needed.
***Cooking octopus can be a bit tricky in terms of times, so make sure you're always checking the pot. Sometimes it will need 30 minutes, other times it may need less.