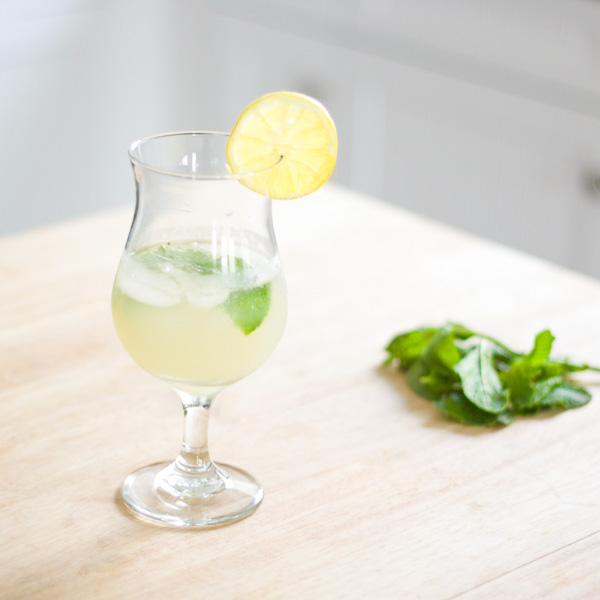 Today is our first drink post. After a few of these, you’ll definitely be yelling OPA as you partake in some Greek dancing.

As some of you may know, last week Lemon & Olives turned 1 (we’re giving away free stuff to celebrate). We’ve got a lot of stuff planned for year 2, and one of them is really pushing ingredients and Greece’s flavors to new heights.

We’re currently testing cooking with things like ouzo and Greek mountain tea, getting acquainted with saffron, and seeing how far oregano will go.

Today is an example of what we attempted with ouzo. Taking a couple popular Greek flavors, ouzo, mint, honey, and lemon, and combining them together to make a lovely drink called: Ouzo Lemonade (ούζο λεμοναδα).

Let’s get something out of the way however, for those of you that have never had ouzo, I will tell you it taste exactly like black licorice, since it’s flavored with anise.

Therefore, with anything that contains ouzo, there will be a hint of that flavor. If you’re not a fan (like Jane), you may not like it. However, with these type of recipes, we hope it will open the doors for others, as the flavor isn’t as strong as drinking it straight up.

Also, you probably won’t find this served all over Greece. To a Greek, ouzo is drank straight with a little iced water. However, in Greek communities outside of Greece, there is a growing trend to create innovative drinks with not only ouzo, but olive oil as well (we’ll be attempting that later).

As we learn more and more about Greek cuisine, we’re being exposed to Greek cooks such as Diane Kochilas and Michael Psilakis that are presenting not only traditional Greek dishes, but taking them to new levels, and that’s what we want to do in year 2 as well.

We’re so excited to show you the recipes we’ve been working on in the coming months!

Today’s drink post will satisfy those of you that are living in places where summer is occurring. For us here, it’s been so hot. Having a cool refreshing drink was the initial idea behind making this.

The honey gives it a slight sweet taste, the lemon a tang, and mint a refreshing complex. The ouzo adds its natural anise flavor.

Feel free to add more or less water to achieve the dilution of your choice. The more water, the less you’ll taste the black liquorice (however, it can become too watery).

As they say in Greece, “Yiamas” (γεια μας- to your health/cheers).