Visiting Kalamáta (Καλαμάτα), located in the Messenia region of Greece, is the second most populated city in the Peloponnese (Πελοπόννησος).

Most know of this city by one of its main export sources, Kalamata olives, however there is so much more to this city than meets the eye. As a side tidbit, it’s where Kenton’s Greek bloodline comes from.

If you find yourself in Greece, definitely travel outside of Athens and see the beautiful Peloponnese region! It’s cheaper and easy to get to, as we’ll go over.
Kalamata has roots that date back to ancient times. According to Homer, the ancient city of Pharai (Φηραί) once stood high on the hill top where the Castle of Kalamata ruins are located today.

A Little Background On Kalamata

Speaking of the castle, the location holds an important notion of how Kalamata got its name. During the 6th century AD, a church was built on the hill to honor the Virgin Mary. Within this church there was a beautiful icon built of the Virgin Mary that had beautiful black eyes (Kalomata – kalá mátia” which means “good eyes”), and so Kalomata became known as the city of Kalamata. If you’re curious about the Kalamata Castle, check out this site for some more historical information: Castle of Kalamata.

There are plenty of beaches to choose from when visiting Kalamata. While one could argue that any stop along the main road (Navarinou) is good enough, here’s the more well-known popular ones to keep an eye out for when planning your stay. We’ll start at the city center and move east first. Lastly, some beaches are awarded the Blue Flag, which we’ll highlight. 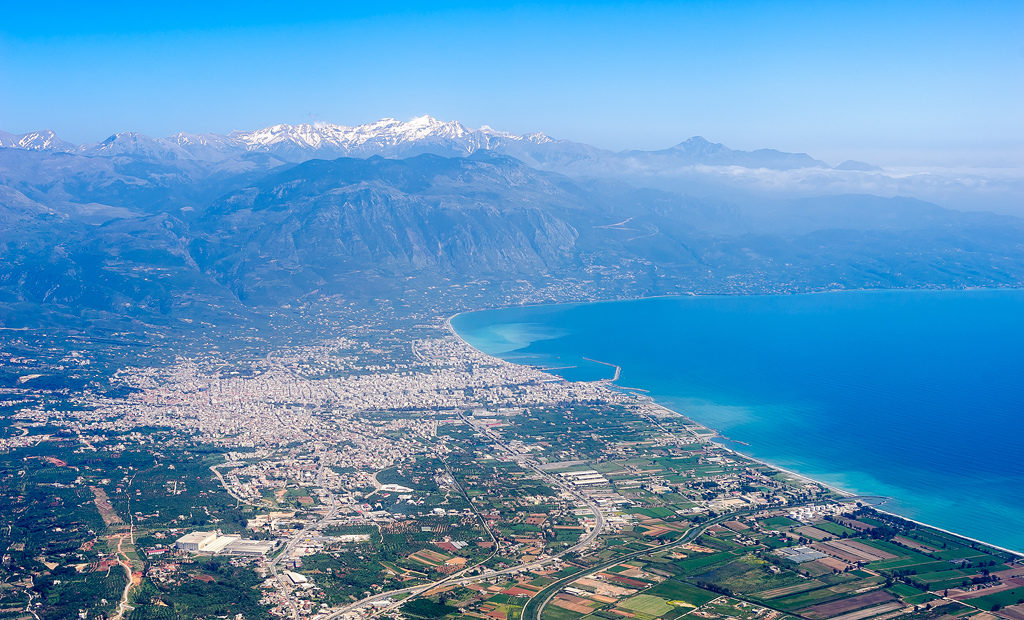 One can access this beach via foot from the city center. Awarded the blue flag, it’s perfect for swimming and relaxing after spending the day wandering the city.  Access to this beach is free, and you’ll find many tavernas along its shores. Pro-tip: the eastern area of the beach is best for swimming, but may also be the most crowded on weekends.

3 miles (5km) east from the city center of Kalamata. This area is actually an extension of Kalamata Beach and tends to be more focused on younger crowds, as it has many beach bars in the area. This area also has a lot of nightclubs that stay open until the wee hours of the morning. During the summer months, this beach and the next, Almyros, tend to be extremely popular with both tourists and locals alike.

This beach is located just under 4 miles (5km) east of the city center of Kalamata. This along with Verga, tends to be the most popular and crowded beach. Here you can see people doing everything from wind surfing to playing beach volleyball.

This beach is located about 6 miles (10km) east of Kalamata. It has plenty of free parking, lifeguards, and is easy to get to. Perfect for families.

Located about 7.5 miles (12km) east of Kalamata, this beach is known for being more family friendly, quiet, and has greenish blue waters. It’s a small fishing town, so it’s quaint, and there are many fish tavernas to choose from.

Okay, so that’s it for the east of Kalamata. There are a few other beaches even further east that you can research if you’d like. The most well-known and beautiful would probably be the beach of Stoupa, which is about 25 miles (41km) away. Now let’s go back to the city center and move west.

About 7.5 miles (12km) to the west, here you’ll find one of the biggest beaches around Kalamata. Perfect for those beach strolls or volleyball games. It also has many amenities and is very well organized. This beach is also awarded the blue flag.

About 10 miles (16km) to the west, sits this beach. It’s a simple beach that is perfect for an afternoon swim. There are playgrounds and coffeehouses nearby – so it is great for a family day.

That about completes the beaches in and around Kalamata. Special note that each of these locations has hotels nearby, so after deciding on a beach, search for nearby hotels, each location will have some to choose from.

Things To Do And See In Kalamata

Here’s a great list to get you started. There is so much to see and do visiting Kalamata I’m sure once you arrive you’ll find 100s of other things. Also, wandering the old town and small alleys makes for an adventure in itself.

Getting to Kalamata From Athens

All this talk about Kalamata, now let’s explore how to get there. Luckily, it’s very easy!

This will be the main option when visiting Kalamata, save for renting a car or hiring a taxi. I would recommend this route, as it’s easy, cheap, and comfortable. I’d recommend taking the express if you can, as it’s a straight shot from Athens to Kalamata and takes about 2.5 hours. It costs about $25 dollars (24 euros as of Jan 2017).

These will vary, so check the Messinian bus services website, ktelmessinias.gr for the most up-to-date timetables.

You can see the most up-to-date ticket price as well as order tickets online so you’ll be all set to go!

Also, on that website you can order a ticket to Sparti (Sparta) to check out the homes of the mighty 300 which isn’t far from Kalamata.

Also worth noting, make sure no strikes are going on, as buses may run late, but for the price, it’s worth the extra wait. Keep in mind that a taxi from Athens airport to Kalamata can run about 200 dollars (200 euros as of Jan 2017).

To check on the buses from the airport to the main bus stations, north of Athens center, check out the Public Transport of Athens website for real-time information. You want to head to: Leof. Kifisou 100, Athina 104 42, Greece.

Yeah, so about that…. In 2010, they stopped! One of the train stations is a museum now. So a bus, taxi, rent-a-car, a flight that is in season, or a friend are your only options to get there.

Check out taxibeat.gr and get their app when you arrive. No pickup fees and they seem to be highly recommended. Others are: Kosmos, tel 18300, their app (TAXI 18300) or their website 18300.com. Uber is there now, but taxibeat seems to be cheaper (given the research we did online) definitely check both and see.

If you’re visiting Kalamata in the summer, you may be able to fly directly into Kalamata airport.

You’ll want to check places like easyjet, Aegean Air, and a few others to see. It is limited, and depending on where you’re flying from, it may be more expensive.

Your best bet is to start with an airline aggregator like Skyscanner and Google Flights. Again, expect it to be lots of money if you’re planning on coming in June-August. A bus from Athens may be what works best.

Where To Stay In Kalamata

For this, your best option is to find a beach you like while visiting Kalamata and get a hotel next to it. I’d recommend you start here, Booking.com Kalamata Greece and see what deals you can get. Honestly, you’ll be out and about so keep that in mind when looking. Economical over luxury is our motto – better to spend the money on experiences within the city.

Also, AirBnB is a great choice to get some deals. Check them out as well! If you’ve never used AirBnB before, you can get a $35 dollar credit! (I’ll get it too if you use this link – so, thank you!!)

Well, I hope that gives you a great insight into visiting Kalamata, Greece! It’s a great place, with lots of beaches, great history, and being outside Athens, it’ll tend to be cheaper too. When you’re traveling – that’s always a good thing.

We couldn’t have written this without these websites which provided great resources during our research for this post.