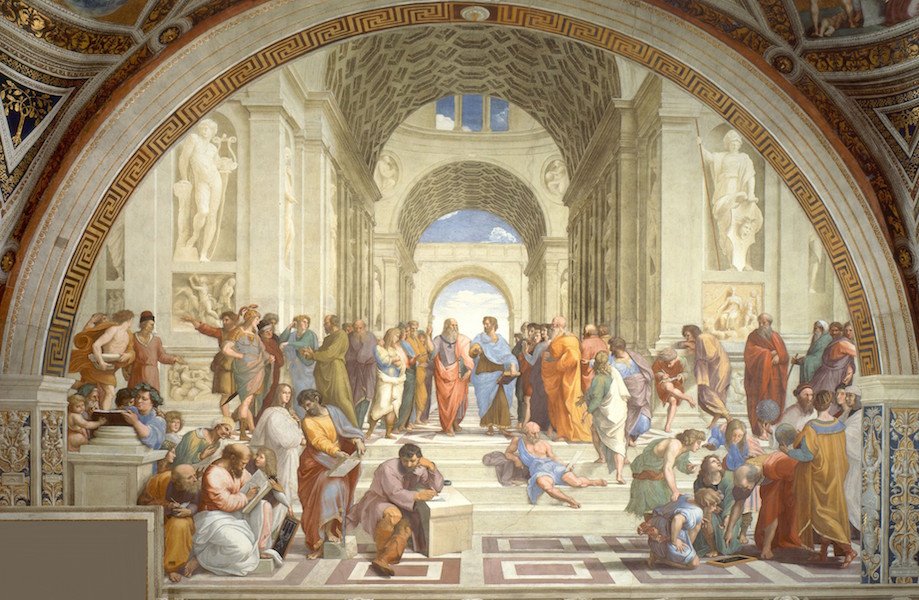 What did the ancient Greeks eat?

This is a question I often get asked and one that I’m always learning something new when answering. I love doing research about the ancients and their foods. It is cool to me to think that what I may be eating is something Plato, Aristotle, or even the mighty Alexander The Great may have enjoyed.

While there are foods that are undoubtedly ancient, like pasteli, others we may never know for sure, unless they contain ingredients we know the Ancient Greeks didn’t have, like tomatoes.

Is that kind of weird? Imagine going your whole life never seeing or eating a vegetable that is so widely available now. I guess you wouldn’t have known what you were missing.

Other dishes we know the ancient Greeks ate were fish based. Fish was a staple for most Greeks living in ancient times since it was so readily available from the sea. What about red meat? In today’s view, that be reserved from the 1% or upper class.

How did the ancient Greeks eat?

As a matter of fact, they ate much like we do now. They had three meals a day. They woke and had breakfast, broke from midday work for lunch, and ended the day with dinner.

Most Ancient Greeks had the same thing: bread dipped in wine. Now I know what you’re thinking: wine for breakfast? As a matter of fact, wine was safer than water and consumed more than it, too. Even young children enjoyed a glass or two. I mean, they did serve their wine in a kylix (ancient Greek: κύλιξ, pl. κύλικες; pronounced: “keye-liks”) which is a massive cup like this: 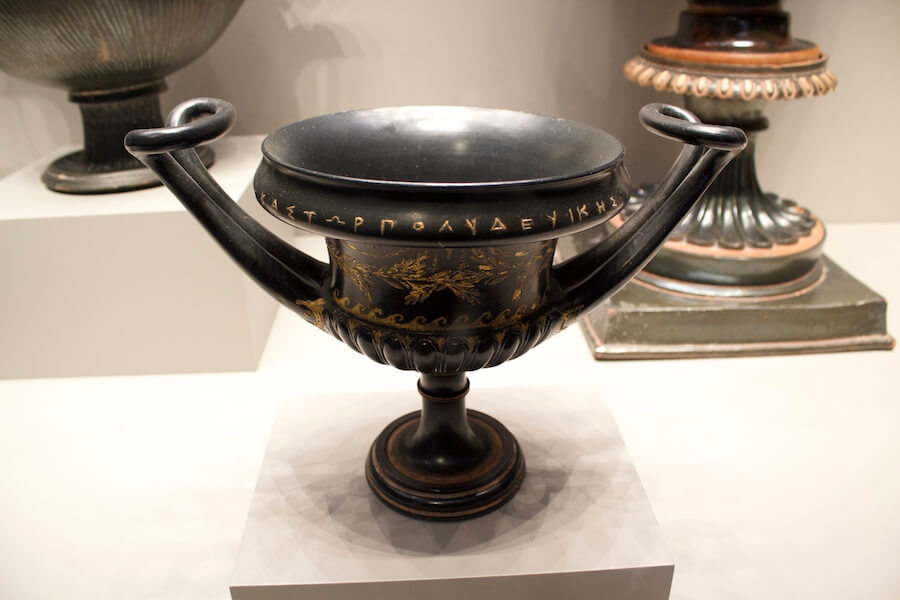 So yeah, they were pretty serious wine drinkers.

The bread that went along with their wine in the morning was made from barley, the main source of all bread in ancient times.  It was probably hard, so the wine would loosen it up and make it easier to eat. Could they have used something else to go with their bread? Sure, but where’s the fun in that?

If they were tired of dipping bread in wine, they also ate something called a teganites (τηγανίτης), which would have resembled a pancake. These were made with wheat flour, olive oil, honey and curdled milk and were usually topped with honey or cheese. Hmm..I should try making this soon.

After the Ancient Greeks went out and performed their various labors, they would break at midday to eat and rest so they could continue working after. It then comes as no surprise that this meal included, yes, wine. The afternoon meal for the Greeks had them enjoying  more of that bread and wine from breakfast, however the difference here is that they also were drinking it a bit more as well. Normally, they did not drink the morning wine, but from lunch on, it was happy hour and they indulged a bit more.

Lunch was not viewed as a proper meal, but rather a time to refuel on light foods so they wouldn’t get tired (read: food coma). Thus, they consumed small servings of thinks like: figs, salted fish, cheeses, olives, and bread.

These small plates of different foods I believe transformed into what Greeks have today – mezedes. It’s like tapas in Spain. A collection of small dishes or appetizers. In many other countries in Europe and the Middle East, this is very much part of the culture, too.  Who started it first? I’m not too sure, but the practice of serving small plates is alive and well.

After a long days work, the appetite had grown and now it was time to really eat. This was and still is in Greece, the most important meal of the day. This was the time they would gather with friends and discuss philosophy (some of them anyhow) and their daily events. Notice that I said friends and not family. This is because men and women normally ate separately. If they had slaves the slaves would serve the men dinner first, then the women, and then themselves. If they did not have slaves, the women of the house served the men first, and then themselves after the men were done.

Since dinner was the most important meal, this is where most of the foods were consumed. At dinner, the Ancient Greeks would eat: eggs (from quail and hens), fish, legumes, olives, cheeses, breads, figs, and any vegetables they could grow and were in season. Such as: arugula, asparagus, cabbage, carrots, and cucumbers.  Any type of red meat was reserved for the wealthy since it was harder to come by as say the fish from the sea. Therefore, many Greeks lived a full life having only ever had red meat a handful of times. It wasn’t all bad however, as the mediterranean lifestyle limits meat to a few times a month, so in reality, the lower class was healthier than the upper class, I doubt they saw it that way however.

Dessert was not a daily thing in Ancient Greece. Much like the diet of today, it was only consumed on occasion. As for sweets, sugar wasn’t known to the Ancient Greeks, honey was the main sweetener. Thus, things like cheese drizzled with honey, or figs and olives with honey, was the most common type of dessert.

Ancient Greeks and Their Wine

Since we can see the Ancient Greeks drank so much of this stuff, let’s look at it a little deeper.

Besides water, which was a daily task for the women of the house to fetch, this was the main drink of the Ancient Greeks. It was so important to them that they even had a Greek god of wine – Dionysos (Διόνυσος). Wine was served at all meals and during the day. We know the Greeks made red, white, rose, and port style wines. The main areas of production being  Thásos, Lesbos and Chios.  To see Greek wines of today, check this page out: A Guide To Greek Wines

I want to stress the importance of wine in terms of a cultural thing and not as a means to an end. What I mean by this is that the Ancient Greeks did not drink wine to get impaired. No, as a matter of fact, it was considered bad to get/be drunk. They were meant to enjoy the wine for what is was and not for what it could do if one had too many.

As a matter of fact, during the Ancient Greek symposium (συμπόσιον from sympinein, “to drink together”) the leader of the event, called a symposiarch would dilute the wine and determine how strong it would be. If people got out of hand and became intoxicated, they were the talk of the town and not looked favorably upon. It was a social event.

To get a sense of how they felt, the following is a fragment from Eubulus’s play Semele or Dionysus written in 375 BC.

For sensible men I prepare only three kraters [what the wine was served in]: one for health (which they drink first), the second for love and pleasure, and the third for sleep. After the third one is drained, wise men go home. The fourth krater is not mine any more – it belongs to bad behaviour; the fifth is for shouting; the sixth is for rudeness and insults; the seventh is for fights; the eighth is for breaking the furniture; the ninth is for depression; the tenth is for madness and unconsciousness.

Even in Greece today, most drink with food and getting drunk is never the end goal. It’s about enjoying life.

Remember earlier when I said the leader of the symposium would dilute the wine? This is because Ancient Greeks did not drink wine straight. As a matter of fact, it was considered barbaric to do so. I wonder what they would think of us nowadays? Instead, all wine was cut with water so people would not get inebriated. And let’s be honest, if you’re drinking wine all day, you need it cut with something if you plan on getting all your work done.

Something briefly worth noting, is that the Ancient Greeks also drank something called, kykeon (κυκεών), which was made by combining barley gruel, water (or wine), herbs and goat cheese into a almost shake like consistency. Yummy.

Whenever I get to talking with others about Ancient Greece, the Spartans are always brought up. Don’t get me wrong, I too love the whole view of them being amazing fighting machines. The mighty 300 of them taking on the entire Persian army at Thermopylae, and the line that Dienekes, a Spartan soldier, said in response to the thousands of arrows that would be coming to pierce their shields [paraphrasing  a bit]:

Hey, Dienekes, the Persians have so many arrows they will block out the sun.

Dienekes looks up, his red cape flowing in the wind, and replies:

“So much the better…then we shall fight our battle in the shade.”

Of course he says this.

However, from a culinary standpoint, the Spartans had maybe the worst food in history. Not maybe, they definitely did.

They ate something called, melas zomos (μέλας ζωμός) or black soup. How was this made? Simple, just boil some pigs legs, pig blood, salt, and vinegar.

Yeah…this is why they screamed a lot and kicked people down black holes.

A version of this article first appeared on About.com: Eating like An Ancient Greek. References: Wikipedia.